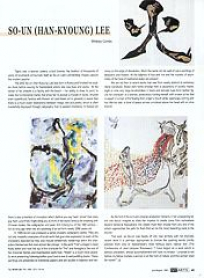 Tigers roar, a woman cowers, a bud blooms, the tradition of thousands of  years of brushwork announces itself as So-Un Lee's penetrating images capture  the modern psyche.

The artist So-Un (Han-Kyoung) Lee was born in Korea and finished her stud ies there before leaving for Switzerland where she now lives and works. At the  center of her artwork is a facility with the brush -- her ability to draw, to paint, to  make the fundamental marks that allow her to pursue a myriad of styles Anyone even superficially familiar with Korean art  (and Asian art in general) is aware that  there is a much closer relationship between image, text and poetry, which is  often masterfully displayed through calligraphy, than in western traditions In Korean art there is also a tradition of innovation which (before you say "wait I know" that video guy Nam June Paik) might bring you to think of the stylist famous for breaking with  Chinese modes, the calligrapher and poet, Kim Chong-hui of the 19th century -- not so long ago when we are speaking of an art form nearly 2000 years old.

In 1999 So-Un Lee produced a series of poetic calligraphic works Theyare not only masterful examples of brush work that give new expression to each of the characters depicted but they also include emblematic renderings within the char acters themselves that read almost like collage In the work "Fire" a dragon's head floats within and near the top of the character for "fire" and throughout the rest of the character flames and disembodied parts floal "Water" is a much more peaceful work presenting frolicking turtles (you have to see it) and paddling ducks. These  paintings are presented on traditional papers and are studies in balance and harmony on the edge of dissolution. Much the same can be said of Lee's paintings of  blossoms and flowers. All the balance of hue and line and the mystery of asymmetry of the best of traditional styles are presenl We are led then to recent works that veer from nearly abstract to extremely literal narratives. Sharp dark forms emerge from a cacophony of colorful marks; eight or nine very large brushstrokes in black and delicate hues form neither figure nor character; or a woman, protectively holding herself, with snakes at her feet is awash in a river of fire flowing from a tiger's mouth while, seemingly coming with too little too late, a dove of peace arrives unnoticed above her head with an olive branch.

As the font of So-Un Lee's diverse production remains in her unwavering talent one would imagine so does her impetus to create come from somewhere beyond temporal fluctuations; the viewer must then choose from any one of the artist's approaches the path for them that will be the most rewarding route to the source. That said, as So-Un Lee heads off into new territory with her dramatic  recent work it is perhaps appropriate to borrow the opening words (mildly  altered) from one of Switzerland's most famous son's radical text (The  Confessions of Jean-Jacques Rousseau) "I have begun on a work which is  without precedent, whose accomplishment will have no imitator. I propose to set  before my fellow-mortals a woman in all the truth of nature; and this woman shall  be myself.