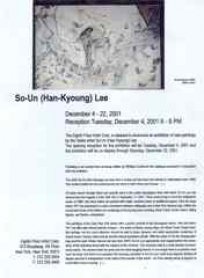 Following is an excerpt from an essay written by Whilney Combs for the catalogue produced in conjunction with this exhibition.

The artist So-Un (Han-Kyoung) Lee was bom in Korea and has lived and worked in Switzerland since 1968. She studied traditional and contemporary arl forms in both Korea and Europe. (...)

Of some recent strongly literal and specific work is the series Apocalypse New York which So-Un Lee has derived from the tragedy in New York City of September 11, 2001. These works bring to mind the calligraphic series of 1999. Uke them letters are painted with bright, brushed colors on traditional papers. Here the large letters "NY" are presented in a style somewhere between calligraphy and a New York Yankees logo. WIthin the broad black lines of the letters are renderings of the burning and crumbling World T rade Center towers, falling figures, and flames, everywhere.

The paintings of the Daily New York series offer a pacific contrast to the Apocalypse works. Here the letters  "NY" are filled with almost patriotic imagery -- the statue of libert~ waving flags, the World Trade Center intact.  But perlJaps not too much attention should be paid to these dynamic and oddly appropriate renderings of  recent ho"ol: Horrors come and go and the eternal questions remain. WIth the series of On the Roving paintings and the work Stolen Harvest (all also from 2001) So-Un Lee approaches and reapproaches the conundrum of the individual faced with the mystery of the universe. The recurring motif is a nude woman surrounded by nature. The woman holds her arms over her chest hugging herself: In one image there is a question mark  over her head. But there is no question this recurring character in So-Un Lee's work is by degrees fending off danger and lost in introspection in the midst of the wonder of the world -- be it the swirling winds of autumn or a bird filled forest in spring. (...)